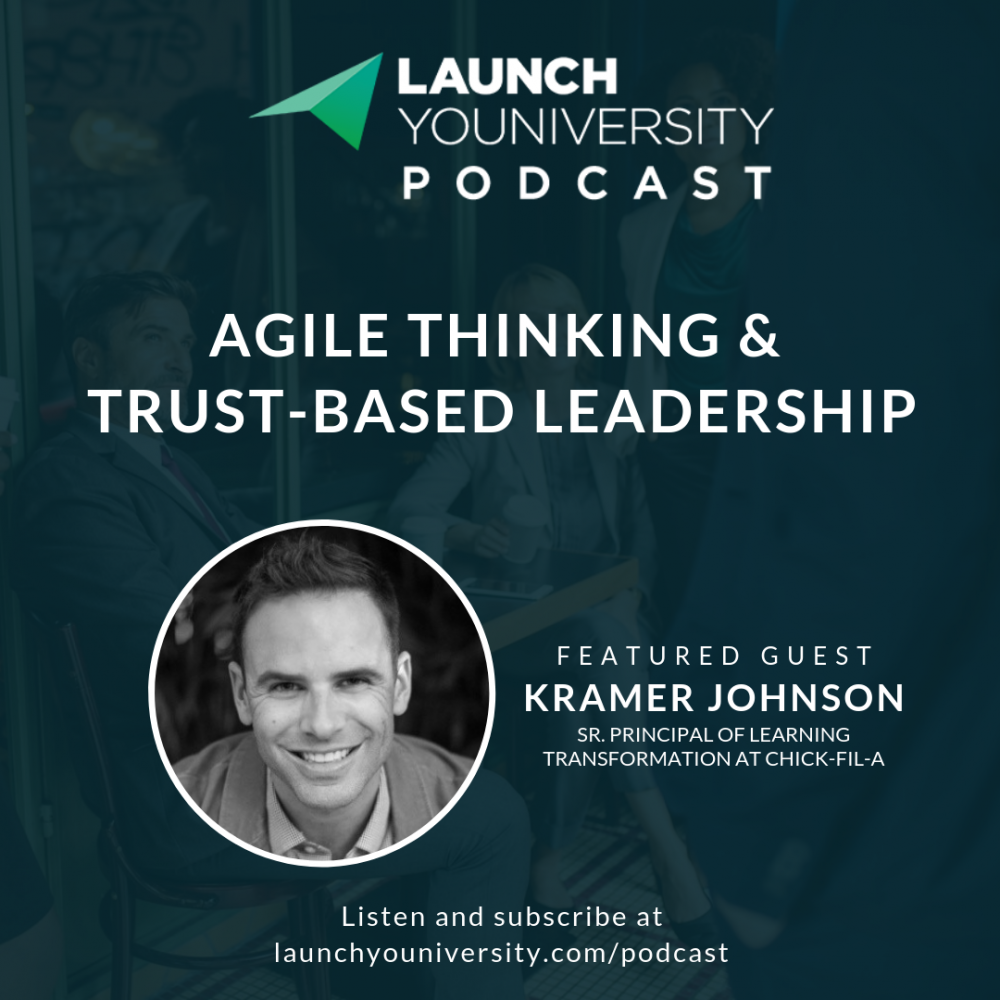 The agile method is in fashion for software development and project management, but you probably have never heard it explained or implemented as well as you will hear from our latest guest Kramer Johnson. As one of the leaders responsible for Chick-fil-A’s mobile ordering app, Kramer pulls from his experiences in both the startup and consulting worlds to highlight the power of agile thinking and trust-based leadership.

Listen in as Kramer explains to Launch Youniversity mentor Shane Benson exactly how everyone has a superpower, how agile thinking can help you solve your biggest problems, and how leading your team boils down to checking your title at the door. Kramer Johnson brings incredible insights to an episode you will want to listen to twice.

Welcome to episode 136 of the Launch Youniversity Podcast.

In leading various teams inside and outside Chick-fil-A, Kramer Johnson found one thing to be consistent: great teams need a mantra. As stated by Kramer, a team is formed as people rally around solving big problems, but the secret to success is helping those teams define their “how.” How will those teams approach finding their solutions? For Kramer’s Chick-fil-A One team that motto was “stay scrappy and have fun.” This mantra was not written as a mission statement or stated as a value, but rather the saying came off the cuff and was adopted by the team naturally. Mantras, as Kramer explains it, will be the things that you hear your team is saying back to you, and it is those things that should be written in big, bold letters on the wall.

2. Finish before you start again.

As Shane explores the ideas around agile thinking and project management with Kramer, there is one point that stands out as the most practical takeaway — finishing three things is much better than half-finishing 15. Kramer introduces the idea of a “work in progress limit,” which is a person’s or team’s capacity for active projects. Both for individuals and teams, the key to success is defining what three things are going to be accomplished before anything else. Once those goals are achieved or completed, then the next three goals can be tackled, but not before then.

3. Trust-based leadership requires checking your title at the door.

Does your team know you care about them? Do they have a space they can call their own? Did they define their next big goal for themselves? As pointed out in this episode, these are the questions that great leaders are asking. Kramer notes that most leaders struggle with guiding and motivating their teams. However, he goes on to challenge traditional thinking by offering up the idea that leaders do not need to set the short-term goals, the team members do. Then, the leader is there to hold the team accountable, but only after gaining the right to have the hard conversation. That right is earned first through caring for them on a human level.

Thank you for listening to the Launch Youniversity Podcast! If you have a question that you want to be answered on the podcast… ask us here!